Halloween slot is a game created by the Bulgarian company, Euro Games Technology, and has been provided with impressive graphics, stunning animation and some interesting gaming features. This game has five reels and three rows, and twenty pay lines. As ever, you will be looking for three or more matching symbols on the reels to enjoy a payout. The game includes some advanced functions, with free spins and the popular four progressive jackpots offered in many of EGT’s slot games.

There is a great variety of symbols, which is appropriate for this game which is based on the Halloween traditions of several countries. You will see a Male who is a Vampire, a black cat against a full moon, bats and a spider in its web, a basket with various candies, a beautiful brunette lady who must be a Witch, and the classic playing card symbols, from Jack to Ace. There is a Wild, which is a Witch’s hat and broom, and an Extra Wild, which is a lamp made of the traditional Halloween pumpkin. The Scatter is an ancient Book of spells.

The most valuable symbols in the Halloween slot game are the two human icons, the Witch and the Vampire. Each of these symbols appearing on the reels will pay 25 coins for three, 50 coins for four, and 200 coins for five Vampires or Witches.

A Wild and an Extra Wild

The Extra Wild Pumpkin only appears on the fifth reel, and can replace all other symbols except the Scatter. The key role of the Extra Wild in the Halloween slot game is to turn all the playing card symbols on the screen at the time it appears into Wilds, which can then also substitute for all other symbols except the Scatter.. 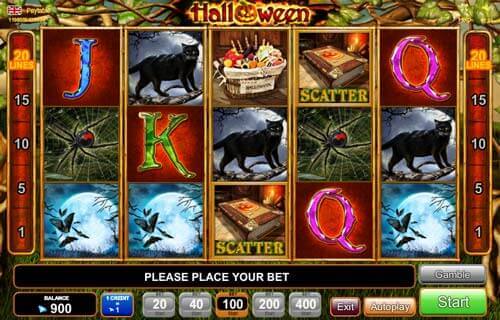 The Scatter Book is found on all three central reels. When it appears on these reels at the same time, the player will win the total of two of his bets, and the free spins bonus round will begin, with ten free spins. Each of these free spins can earn a two time multiplier as well.

Halloween slot game is provided with the progressive jackpot rounds that EGT include in most of their online slots games. There are four jackpots, each named after a suit of playing cards. The jackpots are random, and can begin during any spin round. Twelve face down cards appear on a special screen. The player turns them over to reveal the suit, and as soon as there are three matching suits, the jackpot round ends. The player will be awarded with the appropriate jackpot of the suit he has uncovered.

EGT has also provided the Halloween slot game with their well known Gamble feature, to give players a chance to increase their winnings. The player can try to guess the colour of a face down playing card, either red or black. If the guess is correct, you will get all your winnings to date doubled.

Halloween slot game can be played on your mobile device too.

All About Battle Of The Atlantic Slots Game By IGT

Battle of the Atlantic slot by IGT online casino software has a total of twenty paylines and five reels. The...

Slotter Casino Offers So Much More!

Despite the name suggesting that they are only a slot casino, this is, in fact, somewhat of a misnomer. Although...

Online pokies are easily the most popular form of casino gaming online. They appeal to a broad age group of...